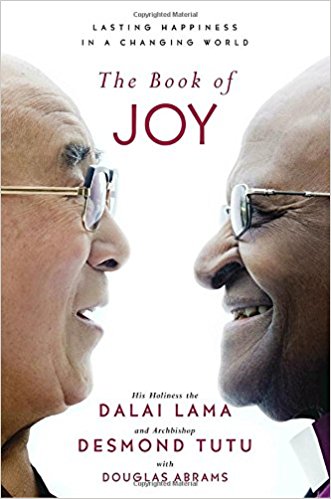 Nobel Peace Prize Laureates His Holiness the Dalai Lama and Archbishop Desmond Tutu have survived more than fifty years of exile and the soul-crushing violence of oppression. Despite their hardships—or, as they would say, because of them—they are two of the most joyful people on the planet.

In April 2015, Archbishop Tutu traveled to the Dalai Lama's home in Dharamsala, India, to celebrate His Holiness's eightieth birthday and to create what they hoped would be a gift for others. They looked back on their long lives to answer a single burning question: How do we find joy in the face of life's inevitable suffering?

They traded intimate stories, teased each other continually, and shared their spiritual practices. By the end of a week filled with laughter and punctuated with tears, these two global heroes had stared into the abyss and despair of our time and revealed how to live a life brimming with joy.

This book offers us a rare opportunity to experience their astonishing and unprecendented week together, from the first embrace to the final good-bye.

We get to listen as they explore the Nature of True Joy and confront each of the Obstacles of Joy—from fear, stress, and anger to grief, illness, and death. They then offer us the Eight Pillars of Joy, which provide the foundation for lasting happiness. Throughout, they include stories, wisdom, and science. Finally, they share their daily Joy Practices that anchor their own emotional and spiritual lives.

The Archbishop has never claimed sainthood, and the Dalai Lama considers himself a simple monk. In this unique collaboration, they offer us the reflection of real lives filled with pain and turmoil in the midst of which they have been able to discover a level of peace, of courage, and of joy to which we can all aspire in our own lives.

His Holiness the 14th Dalai Lama, Tenzin Gyatso, describes himself as a simple Buddhist monk. He is the spiritual leader of the Tibetan People and of Tibetan Buddhism. He was awarded the Nobel Peace Prize in 1989 and the US Congressional Gold Medal in 2007. Born in 1935 to a poor farming family in northeastern Tibet he was recognized at the age of two as the reincarnation of his predecessor, the 13th Dalai Lama. He has been a passionate advocate for a secular universal approach to cultivating fundamental human values. For over three decades the Dalai Lama has maintained an ongoing conversation and collaboration with scientists from a wide range of disciplines, especially through the Mind and Life Institute, an organization that he co-founded. The Dalai Lama travels extensively, promoting kindness and compassion, interfaith understanding, respect for the environment, and, above all, world peace. He lives in exile in Dharamsala, India.

Desmond Mpilo Tutu, Archbishop Emeritus of Southern Africa, became a prominent leader in the crusade for justice and racial reconciliation in South Africa. He was awarded the Nobel Peace Prize in 1984 and the Presidential Medal of Freedom in 2009. In 1994, Tutu was appointed chair of South Africa’s Truth and Reconciliation Commission by Nelson Mandela, where he pioneered a new way for countries to move forward after experiencing civil conflict and oppression. He was the founding chair of The Elders, a group of global leaders working together for peace and human rights. Archbishop Tutu is regarded as a leading moral voice and an icon of hope. Throughout his life, he has cared deeply about the needs of people around the world, teaching love and compassion for all. He lives in Cape Town, South Africa.

Douglas Abrams is an author, editor, and literary agent. He is the founder and president of Idea Architects, a creative book and media agency helping visionaries to create a wiser, healthier, and more just world. He is also the co-founder with Pam Omidyar and Desmond Tutu of HumanJourney.com, a public benefit company working to share life-changing and world-changing ideas. Doug has worked with Desmond Tutu as his cowriter and editor for over a decade, and before founding his own literary agency, he was a senior editor at HarperCollins and also served for nine years as the religion editor at the University of California Press. He believes strongly in the power of books and media to catalyze the next stage of global evolutionary culture. He lives in Santa Cruz, California.