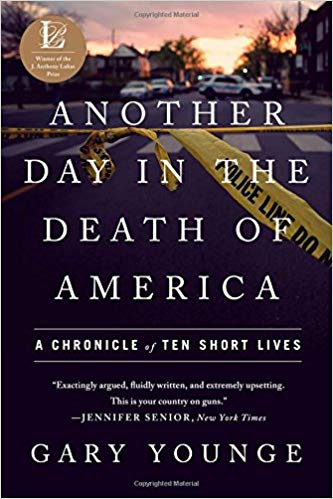 On an average day in America, seven children and teens will be shot dead. In Another Day in the Death of America: A Chronicle of Ten Short Lives, award-winning journalist Gary Younge tells the stories of the lives lost during one such day. It could have been any day, but he chose November 23, 2013. Black, white, and Latino, aged nine to nineteen, they fell at sleepovers, on street corners, in stairwells, and on their own doorsteps. From the rural Midwest to the barrios of Texas, the narrative crisscrosses the country over a period of twenty-four hours to reveal the full human stories behind the gun-violence statistics and the brief mentions in local papers of lives lost.

This powerful and moving work puts a human face-a child's face-on the "collateral damage" of gun deaths across the country. This is not a book about gun control, but about what happens in a country where it does not exist. What emerges in these pages is a searing and urgent portrait of youth, family, and firearms in America today.

Gary Younge, an Alfred Knobler Fellow at the Nation Institute, is an award-winning columnist for the Guardian and Nation and an acclaimed author. In 2009 he won the British James Cameron award for his coverage of the 2008 presidential election, and in 2015 he won the Foreign Commentator of the Year Award. His most recent book is The Speech: The Story Behind Dr. Martin Luther King Jr.'s Dream. His previous books include Who Are We - and Should it Matter in the Twenty-First Century?, Stranger in a Strange Land: Encounters in the Disunited States, and No Place Like Home: A Black Briton's Journey through the American South. Formerly the Belle Zeller Visiting Professor of public policy and social administration at Brooklyn College, CUNY, he has two honorary degrees from British universities.